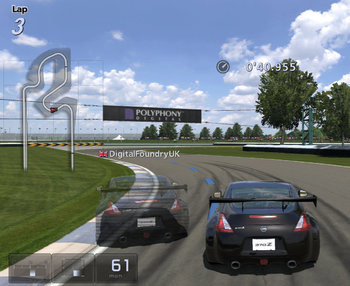 Not what we meant by Ghost Rider.
Advertisement:

In racing games, you sometimes have the option of competing against yourself in Time Trial mode, not just by the final time, but by racing against a hollow "ghost" recording of a previous run. This might be your own run, your friend's, or even a stranger's downloaded from the web.

Some games have "staff ghosts" from the developers of the game, which may have to be unlocked first. Obviously, the developers' top record will be very difficult to beat, but not every staff ghost is like this. Sometimes, less gameplay-oriented members of the staff will provide a ghost, in which case out-racing this ghost might unlock a more difficult ghost.

In any case, ghosts provide an easy visual way to gauge one's performance without checking the clock. It also lets you see how exactly said ghosts achieve their time such as following the fastest line through corners or see where they've made any potential mistakes.