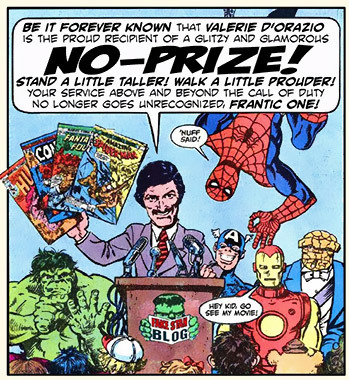 Don't you want one of those?
Strawberries will impress your friends, but that's about it. Only collect them if you really want to!
— Celeste
Advertisement:

A Cosmetic Award is a video game reward that serves no purpose other than proof of accomplishment. These don't change gameplay in any aspect; they are entirely cosmetic. The only thing really gained from these awards is that they're often named after certain in-jokes, Ascended Memes, and the like, depending on how geeky or savvy the programmers are.

In RPGs, this might be a title or rank that player gains upon defeating the Bonus Boss. Computer military-themed games often have an internal award system that will give your character medals, promotions, and other such rewards for completing certain goals but are entirely meaningless.

A Cosmetic Award is different from a Bragging Rights Reward, which is a prize that is very difficult to get but often useless in practice or Awesome, but Impractical by the time you get it (usually by obtaining it only after completing the game's hardest challenge, so you don't need to be any better). A Cosmetic Award, however, isn't even nominally useful; it has no other function than looking pretty. However, since these often come after some sort of high achievement, the reward you get is the bragging rights. The Cosmetic Award is just something you can get a picture of to show to someone when they say 'Prove it'.

As usual, Tropes Are Not Bad. A cosmetic reward will feel just as enjoyable for the player as a non-cosmetic one, and without infringing on the gameplay. This is important for games that focus primarily on player versus player matches since it will feel unfair to get killed if the ground is not even due to rewards that affect gameplay.

Often tracked by an Achievement System. Heavily overlaps with And Your Reward Is Clothes, since the clothes only rarely give in-game benefits. Compare and contrast Not-Actually-Cosmetic Award. For common types of Achievements in modern video games, refer to Analysis.Video Game Achievements.