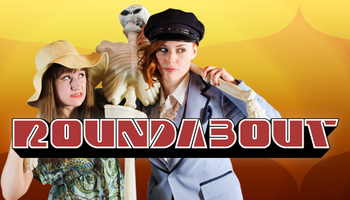 Let's go, Georgio!
Roundabout is a top down driving puzzle game... with a twist.
Advertisement:

Roundabout follows the story of Georgio Manos, the world's first revolving limousine driver. Georgio must learn to navigate the perils of the luxury transport industry while driving a car that literally cannot stop spinning, including picking up passengers, making deliveries, nefarious French Canadians, and falling in love. All the cutscenes are all done as 70's B-movie style Live Action Cutscenes, consisting entirely of shots of Georgio in the front seat and separate shots of the passengers in the back.