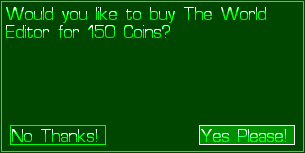 You know there's more where that came from...
"So, I collect shit to unlock shit, then I get shit. Got it."
— Sergeant Rex "Power" Colt, Far Cry 3: Blood Dragon
Advertisement:

Unlockable Content can simply be described as extraneous content that was not available to the player from the start. The hidden content can be anything from concept art galleries, to a hidden character, even the game's Golden Ending. Methods of "unlocking" can be based on challenges, progress, time spent or sometimes just plain money.

Unlockable Content is not content that a player is required to unlock in order to complete the game. It's unrelated material. For instance, "unlocking Level 2 by completing Level 1", is just well... just playing the game (although this is, to an extent, on the way out — qv Alone in the Dark (2008), New Super Mario Bros. Wii, Guitar Hero, post-World Tour. After all, movies and music don't have to be played in order).

Unlockable Content is basically the game developers showing off, and giving the player a little something extra for fun. Or forcing you to Earn Your Fun as the case may be if most of the good parts of the game are locked. Or (in the case of console games) forcing you to buy the game rather than rent it. Many hundreds of gamers may have played the game and not unlocked the content. Or they may have unlocked it and never used it. Sometimes a character is unlocked at the very end of the game, just to give the player some Replay Value.

Due to the increasing capacities/abilities of game systems, game developers and game engines, this sort of content is quickly becoming a Universal Trope.

Are you curious as to how you get the Unlockable Content out of TV Tropes? You just have to read every single page of the Wiki. Then it's unlocked! I swear!