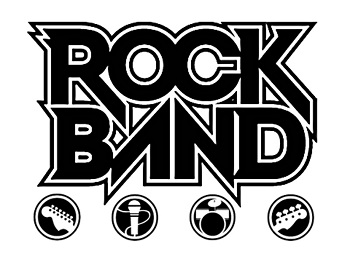 Rocking the world since 2007.
Start a band. Rock the world.
Advertisement:

Remember Guitar Hero? The hours you spent wailing away on your little plastic guitar, pretending to be a musician? Well Rock Band takes that feeling and cranks it Up to Eleven with the introduction of vocals, drums, keyboards, and pro modes, and it allows you to do it with up to six of your friends.

Let's clear up some confusion first: Harmonix made Guitar Hero, Guitar Hero 2, Guitar Hero Encore: Rocks the 80s, which completed their contract, and then went on to release Rock Band in 2007 under their new parent company Viacom through MTV Games, with Electronic Arts handling distribution (Lego Rock Band was handled by Traveller's Tales with the Rock Band 2 engine, although Harmonix took care of the note charting). Guitar Hero 3, Aerosmith, and all Hero games after that were made by Neversoft under Activision Blizzard (Except for Smash Hits, which was handled by Beenox, and Van Halen, which was handled by Underground). At the end of 2010, Harmonix and Viacom announced that they are parting ways, with Harmonix sold to its holding company, effectively making it independent again.

Rock Band was the original release, a Spiritual Successor to Guitar Hero 2. Differences from Guitar Hero 2 include all-black highway backgrounds, rectangular gems instead of round ones, the extensive use of original masters instead of covers; perhaps most important is the addition of vocals (with Harmonix using their experience developing Karaoke Revolution to good use) and drums, which join the pre-existing guitar and bass modes, allowing for a total of four players (bandmates) at once and expanding the number of ways to play from one to three (as the guitar and bass modes share similar gameplay).

Rock Band 2 was released a year later (2008), with significant upgrades to the often-criticized instruments - including the $300 Ion Drum Kit, which can also be used as a regular MIDI drum kit. Not to mention drum tutorials, a World Tour playable alone (or without needing to sing while you do), the ability to port over songs from Rock Band 1 for a small fee (on the 360 and PS3), and more. Both games are supported by a large pool of downloadable songs (the same large pool, in fact — all DLC is on the same platform, though songs released beyond Rock Band 3 won't work in previous games), including some by artists and genres further flung from what most consider "rock", like country, funk, and electronic dance, as well as a number of independent and international artists. Whereas the first game had less than 60 songs, this one had 84, with all songs available on every instrument. It was in this era that the Rock Band Network was introduced, allowing anyone with an Xbox Live developer account to submit their own music and charts and receive a piece of the revenue.

Two years after the release of Rock Band 2, the third game, Rock Band 3, was released in October 2010, with a great deal of new features. The game introduces an all-new keyboard controller, with its own note charts for the 60+ songs that have a real-life keyboard (or substitute) part. Also new is the "Pro" guitar mode with two new controllers: the Fender Mustang controller to simulate a six-string with a fret board of over a hundred buttons, and another one that is a six-string Fender Squier that can be used both in and out of the game. The Pro Drum mode forces players to hit cymbals appropriately, and the Pro Keyboard mode uses all 25 keys on the new peripheral. A MIDI-to-game adapter is available that allows certain real life e-drums and keyboards to hook into the game. The pro guitar is also made to an open standard, so third-party instruments such as the You Rock Midi Guitar work with the game as well. Harmony support like in the Beatles and Green Day games is also present, as well as a much-improved drop-in\drop-out system, similar to the Party Mode in Guitar Hero 5 which allows players to drop in and drop out any time, even in the middle of a song. The game allows up to seven players to play at once, provided one has all seven controllers (two guitars, a set of drums, a keyboard, and three microphones). This time there are 83 songs, which all have guitar, pro guitar, bass, pro bass, (pro) drums, keys, pro keys, and up to three vocals charts except in cases where the appropriate instrument doesn't exist in the original song. Previous DLC songs work in Rock Band 3 with their original (guitar, bass, drums, and vocals) tracks, plus pro drums which were always charted but weren't used, while new DLC songs have all the new features except pro guitar and pro bass charts, which can be bought together on select songs for an extra dollar.

On March 5, 2015, Harmonix announced that Rock Band 4 would be coming to PlayStation 4 and Xbox One. Previous generation DLC is compatible with the next generation and upgraded to include Rock Band 3 features such as harmony vocals and fill lanes at no additional charge, and Harmonix worked "aggressively" to make previous generation instruments also compatible. However, the gameplay is scaled back to basics, with keyboards and Pro modes removed. The developers intend to use RB4 to turn it into a platform for the series, avoiding the stagnation that resulted from regular game releases with regular updates and new content releases.

In August 2012, Rock Band Blitz was released for Xbox Live Arcade and Play Station Network, which serves as another Spiritual Successor to past Harmonix game Frequency (much like Unplugged and the DS version of Rock Band 3), except with 25 new songsnote 23 songs were new to the series while 2 were unexportable songs from Rock Band 2, and compatibility with all DLC released prior to Rock Band 4's launch.

An expansion disc featuring the set-list from the AC/DC - Live at Donington concert DVD was also released (a must because AC/DC didn't want their songs online, or available outside of Wal-Mart, one of their sponsors). Track Packs containing otherwise downloadable songs alongside timed exclusive songs included as an incentive to purchase are also available.

Spin-off The Beatles: Rock Band was released on September 9, 2009, followed by another one based on Green Day on June 8, 2010. The latter game can be exported to the main platform. Both games are exactly what they say on the cover, with no real gameplay change from Rock Band 2 aside from the addition of vocal harmonies, bringing the total number of people that can play the game at once to six. It should be noted that The Beatles: Rock Band is not considered part of the main Rock Band family, and unlike all the other titles in the series, does not export or play Rock Band downloadable content, and vice-versa. It does, however, have its own downloadable content. There is also Lego Rock Band, which adds new songs (obviously) and also (on the PS3 and 360 versions, at least) the same downloadable content that the main Rock Band games allow for, assuming they have been rated "Family Friendly" (See also: Lighter and Softer).

After a failed crowdfunding attempt to develop a proper PC version of Rock Band 4, Harmonix released Rock Band VR exclusively for the Oculus Rift on March 23, 2017. VR is a guitar game only and introduces new mechanics based on guitar chording; however, the classic 5-button guitar gameplay is still present. VR's soundtrack is a mix of new songs and songs from previous entries in the franchise.

Track Pack releases of the series:

Between all of the games (all of which besides the Beatles can be exported to the latest game) and the $2 a la carte downloads (and slightly discounted packs), there are over 4,000

songs from more than 1,600 artists available to be played in Rock Band 3. Since most songs can be played on at least four to five instruments, there are over 16,000 "levels" in this game, each of which can be played in any of four different difficulties note (each difficulty chart is different except for vocals, meaning there are over 52,000 charts out there currently). While a few of them are repetitive (drums and bass mostly) and\or have long rests (keyboard and vocals mostly), the vast majority are a lot of fun to play and listen to. While the cost of DLC makes buying all of them prohibitive in practice, there are certainly a lot of options available when it comes to purchasing songs.

for Rock Band in nearly two years. This led into the eventual Rock Band 4 announcement on March 5, 2015.

The franchise is the Trope Namer for:

Blitz examples go on their own page.

They have "Been Caught Stealing?" Well, we have that on-disc, and the Nothing’s Shocking album, too.
They have three Megadeth songs, well we have Rust In Peace which contains one of them.
They have "2112"? We have all of Moving Pictures.
They have "I'm Broken", we got The Great Southern Trendkill.
They have "No Way Back"? Well, WE have so many packs of theirs (and an entire album) that we're going to offer our latest one (at the time, it was Pack 03).