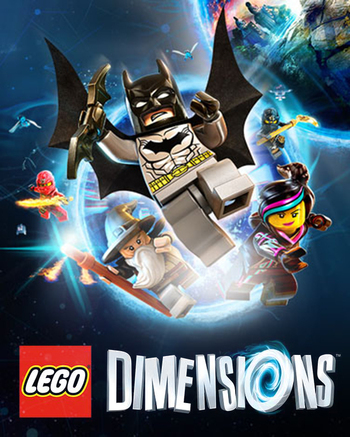 You're gonna need a bigger imagination.
"When kids play with LEGO bricks, they build beyond the singular brands, intermixing all of their favorite characters and universes, and we have come up with a way for players to experience that in games."
—Jon Burton, Founder and Creative Director, TT Games
Advertisement:

LEGO Dimensions is a 2015 video game made by LEGO and Traveller's Tales and published by Warner Bros. Interactive Entertainment. Announced on April 9, 2015, and released on September 27 of the same year, it is a game that follows the same toys-to-life trend established by Skylanders and Disney Infinity.

The game uses minifigures and built vehicles and gadgets standing atop RFID chip stands which are then put into the game on a "Toy Pad" to use through multiple established LEGO franchise worlds. Together, these minifigures must band together to stop the evil Lord Vortech from causing rifts in these dimensions and achieve ultimate power over the entire multiverse. Outside the game, the minifigures, vehicles and gadgets can also be taken off their stands to be used as regular LEGO figures.note Conversely, it is possible to play this game with no LEGO standing atop the RFID chips, but where's the fun in that?

On October 23, 2017, a month after Wave 9 hit, it was decided that no further expansion packs will be released, but Traveler's Tales and WB Games would continue support for the game via customer support and server support.

Note: Vehicles and gadgets marked with a * are Canon Foreigners created for this game.