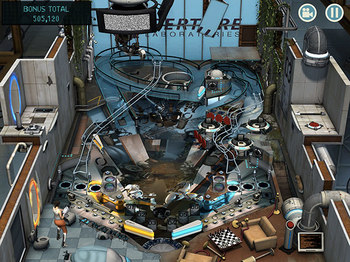 Portal Pinball is a 2015 Digital Pinball Table by Zen Studios for their Zen Pinball and Pinball FX platforms. As the name suggests, it is a Pinball Spin-Off of the popular Portal series of video games.note Mostly Portal 2

Guide Chell and Wheatley through six test chambers in the Aperture Science Computer-Aided Enrichment Center while being monitored and antagonized by GLaDOS. Use your pinball skills to portal your way past obstacles, activate lasers, destroy turrets, and even discover the mysterious Ratman's den. Along the way, participate in some co-operative testing, detour into the turret factory and sabotage GLaDOS's production lines, and knock some cores around for some big points. Pass all six tests and you might just face off against GLaDOS herself. Can you survive her neurotoxin and turret assaults, and take her down once and for all?

"Game Over. Back to testing."