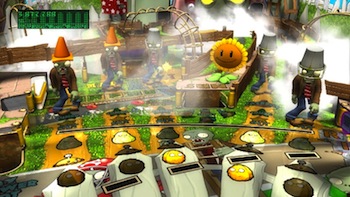 "Brainz..."
"The zombies are coming!"
Advertisement:

Plants vs. Zombies Pinball is a 2012 Digital Pinball Table by Zen Studios for their Zen Pinball and Pinball FX platforms.

As expected, this game is a Pinball Spin-Off of the popular Plants vs. Zombies Video Game. Dr. Zomboss' zombies are shambling down the lanes and attacking your Welcome Mat, so destroy them with judicious shots of the pinball. Collect enough Sun to buy various plant seeds, then use them to infuse your pinball with offensive and defensive powers. Pop the Jack-in-the-Box for random rewards, or go shopping from Crazy Dave's for the really good stuff. If you can complete enough Main Missions, you'll get to go against Dr. Zomboss himself, who's waiting with an arsenal of ice balls, fireballs, and zombies.

Plants vs. Zombies Pinball provides examples of the following tropes: