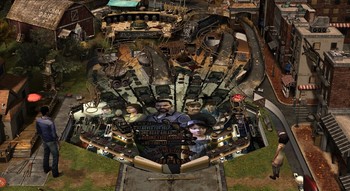 It sure looks like they have a long road ahead to safety...
Telltale Games' The Walking Dead: Season One Pinball is a virtual Pinball Spin-Off and adaptation of the episodic video game of the same name, developed and published by Zen Studios, with help from Telltale Games, the team behind the original source material. This pinball table was released as a premium add-on for Zen Studios' ''Zen Pinball 2'', ''Pinball FX 2'' and ''Pinball FX 3'', as well as a standalone paid app for mobile devices.
Advertisement:

In this pinball game, you journey through the events of the five episodes of The Walking Dead: Season One, with each episode being represented as a main mission to complete. Along the way, just like in the game, you'll have to make difficult decisions on who to save or whether or not to do something, not only while the ball is safely locked somewhere, but also while it's in play, too. And while you're at it, enjoy looking at the diorama-like set pieces from all five episodes that shape the playfield...and your only opportunity to see Lee and young Clementine as animated, 3D figures.

The Walking Dead: Season One Pinball provides examples of the following tropes: