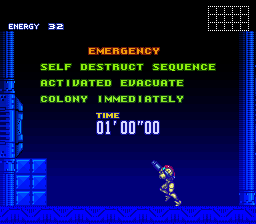 Run, Samus, run!
"...I ran out of time, and the unit disappeared. 'We lost contact!' went a character. BULL. FUCKING. SHIT.note Caption: WHAT. ARBITRARY. SILLINESS. All possible threats were dead! We didn't lose contact; I was looking at them! They were right fucking there! We were close enough to communicate by waggling our eyebrows at each other! What the fuck happens when the stupid arbitrary time limit runs out, their Battle Royale collars explode? They all lose honor and disembowel themselves?! WHAT?!"
— Yahtzee, Zero Punctuation, on this trope causing him much frustration in Halo Wars
Advertisement:

Quite simply, the player is given a finite amount of time to complete a goal, with the penalty for running out of time being Game Over or the loss of one of their Video-Game Lives. This can be particularly jarring, since most gamers are used to being able to Take Their Time, and (aside from the occasional Time Bomb and/or Collapsing Lair) the reason why a given level should even need a time limit isn't always apparent.

Timed gameplay sequences generally show their countdown onscreen, allowing the player to know their Exact Time to Failure. Exactly how stingy the time limit is varies; Turn-based games will usually measure time by the number of "rounds" or "turns", and even real-time games will generally pause the clock when the player is busy accessing their menu screens (instead of playing the actual level). However, in some cases the clock is implacable and continues to tick regardless; for example, online games typically measure time by the server's clock, rather than the player's, which can add a frustration if a network communications error breaks their connection (as even time spent attempting to reconnect and re-login is counted against the mission clock). There may even be Power Ups that extend the time limit a little.

Level timers originated in arcade games which needed some kind of mechanic to discourage players from hogging the machine without putting in more coins, and spread to many Nintendo Hard console and computer games that aimed to provide arcade-style gameplay. In a few cases, having the timer run out is the only way to get a Game Over, with all the other obstacles in the game merely serving to make the player waste valuable time. Many older arcade racing games had stricter time limits where unless you were moderately good, you were destined to run out of time; newer games have bigger time limits that aren't much of a threat unless you're pathetically slow or stop playing. In a similar vein, this is why fighting games have the ubiquitous 99-second timer. It was an arcade mechanic that carried over to the home consoles despite serving no purpose there (until the rise of online play, that is), and you'll notice that wrestling, boxing, and MMA games lack any kind of timer despite falling under the same genre; they originated on home consoles.

Some games have to be completed in their entirety under a single time limit; typically in these games you can continue if you die, but the timer just keeps going. If time runs out, you might be able to keep playing to get a bad ending rather than have an immediate Game Over.

There are some games where the timer exists, but is extremely lenient (for example, a 10-minute time limit in a level that takes 2 minutes for the average player to complete) and is mostly just used for calculating end-of-level point bonuses for completing a level quickly. On the other end of the scale, a few particularly nasty games don't let you know there's a time limit — sometimes even a time limit for the entire game — until it's too late.

The Timed Mission completes the unholy gameplay trinity alongside the Luck-Based Mission and Escort Mission, and things can get very bad when any two (or all three) of these are combined. The logical inverse of this trope is the Hold the Line mission, in which the clock is on your side and your objective is to survive until the timer expires.

Timed missions may end with an Always Close moment, unaffected by the actual time left on the clock. The subversion is Take Your Time, where the game tells you that the Big Bad is coming to town or the Distressed Damsel is in imminent danger, but in actual gameplay, you can do all the sidequests and exploring you want as long as you don't do anything that advances the story. If your supporting cast is yelling at you to move things along anyway, that's Continue Your Mission, Dammit!.

For cases where an expired mission timer doesn't trigger an immediate Game Over, but instead unleashes an additional in-universe threat to hassle the player with until they do complete their mission (or die trying), see Stalked by the Bell.

Though some games still incorporate timed elements, this is more often than not the reason people prefer Wide-Open Sandbox style games. As to stay consistent with the amount of freedom a player has over the game world, they usually have very few timed missions, or none at all, and the ones that are timed are usually considered That One Level.

See also Race Against the Clock, the way a timed mission manifests in media other than Video Games.

If the mission is a Boss Battle, then you have a Time-Limit Boss.

The side mission that unlocks the Shield ability forces you to navigate an obstacle course in less than 60 seconds. Fortunately, you can retry it as often as necessary.

The side mission that unlocks the Shield ability forces you to navigate an obstacle course in less than 60 seconds. Fortunately, you can retry it as often as necessary.