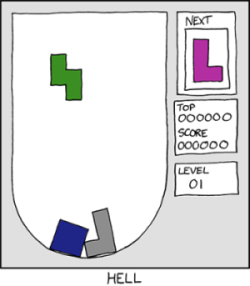 Nobody has won. Nobody ever will.
"This is the Impossible level, boys. 'Impossible' doesn't mean 'very difficult'. Very difficult is winning the Nobel Prize; impossible is eating the Sun."
— Lou Reed, Penn and Teller's Smoke and Mirrors
Advertisement:

An Unwinnable Joke Game is a game that has a clear win condition, but this condition cannot be reached, and this is intentional on the part of the designer. These are almost always meant as a joke.

Compare Unintentionally Unwinnable, where the game cannot be won because of a design flaw or programming oversight, Unwinnable by Design, which is a serious game that is designed so that certain circumstances will render it unwinnable, as well as Endless Game and Wide-Open Sandbox, which don't have a win condition in the first place, and Unwinnable Training Simulation if it's meant as a practice run. For games (including joke games) that are horrendously difficult but have a win condition that is intended to be actually achievable, the trope you're looking for is Nintendo Hard (or, in very extreme cases, Platform Hell)

Certain gambling machines may fall under this trope, though most countries in the world have laws against such machines, on the grounds that gambling is a game of chance, even if the odds are low of winning there are still odds at play that let the gambler actually win the jackpot; the gambler is not throwing away money to play something that is literally unwinnable. Otherwise, the gambler may as well just throw money into an open fire to get the same result.

"Super Kingio Bros." is a version of "Super Mario Bros." with the King instead of Mario, but the game is impossible because you can't jump over the first Goomba.

"Super Kingio Bros." is a version of "Super Mario Bros." with the King instead of Mario, but the game is impossible because you can't jump over the first Goomba.