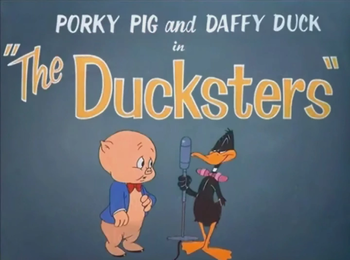 He'll be sorry.....
The Ducksters is a 1950 Looney Tunes short directed by Chuck Jones.
Advertisement:

It stars Daffy Duck as the sadistic host of the radio quiz show "Truth or AAAAUGH!", with Porky Pig as the hapless contestant. Porky must suffer incredibly obscure answers, nigh-impossible challenges, painful penalties, and Daffy's twisted sense of humor if he hopes to walk home with the grand prize... or his life, for that matter.