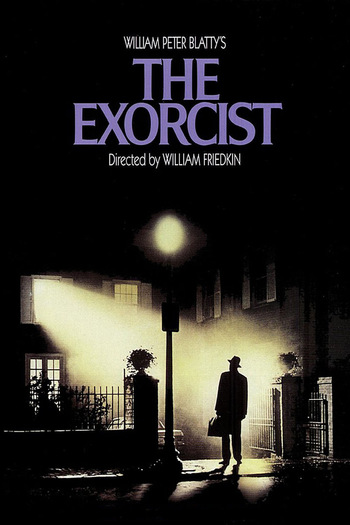 "The power of Christ compels you!"
"Is there someone inside you?"
"Sometimes..."
Advertisement:

The Exorcist is a 1973 Religious Horror film (though the director, William Friedkin, doesn't view it as such) and is the Trope Maker and Trope Codifier for Hollywood Exorcism.

Based on the 1971 novel by William Peter Blatty, and inspired by what was supposedly an actual documented exorcism from 1949, The Exorcist is the terrifying, shocking tale of an originally rather cute 12-year-old girl named Regan McNeil (Linda Blair) and the efforts of her mother Chris (Ellen Burstyn), a famous film actress, her mom's secretary Sharon, and a pair of priests to save the poor girl's soul from the ravages of a powerful, malign entity called Pazuzu (though his name is kept ambiguous in the film).

Initially manifesting as strange behavior in little Regan and her Ouija-board trysts with an invisible companion calling itself Captain Howdy, the being's infiltration is at first dismissed as Regan acting out frustrations after her mother's divorce. As the demon takes hold of Regan, however, she undergoes drastic changes in appearance and behavior, manifesting physical symptoms and incredible strength that cannot be explained by medical science. After Regan starts gliding around the house on all fours face up, licking Sharon's ankles, her mother decides that it is time to consult a higher authority...

The original movie is considered one of the best (and most terrifying) horror movies of all time and was followed by two sequels and (for complicated reasons) two versions of the same prequel, with varying levels of quality and success from each of them. A TV series of the same named premiered on FOX, which was later revealed to be another sequel to the original. There's also a very, very weird non-horror, semi-spinoff movie called The Ninth Configuration, adapted and directed by Blatty himself from his earlier novel of the same name, which is set in the same universe as this movie but has very few direct connections to it. A new trilogy of Exorcist films from director David Gordon Green (Halloween), produced by Blumhouse and jointly distributed by Universal Pictures and Peacock, has been announced, with the first film set to release theatrically on October 13, 2023; this series will also be a sequel to the original film and feature Ellen Burstyn reprising her role as Chris.

The Exorcist is the Trope Namer for:

"That Trope Is Not My Child!":

The demon Pazuzu, through Regan's body, taunts Father Karras about his dead mother.

The demon Pazuzu, through Regan's body, taunts Father Karras about his dead mother.