Devil, but No God 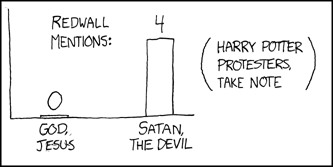 Works of fantasy frequently contain a powerful evil spiritual being who's behind most or all of the evil in the world, a Satan (or satanic figure) or chief God of Evil. This Devil is a very real being with followers, worshippers and real power, who takes an active hand in making trouble for the world. But in an odd twist, a lot of stories leave out the Devil's good counterpart; either there is no benevolent God, or he's only talked about and never actually does anything. This is particularly egregious if the series makes a big deal of the Balance Between Good and Evil.

It's worth noting that the Abrahamic religions (Judaism, Islam, and Christianity) tend to forbid visual depictions of God (the argument being that it's impossible for a human to accurately depict an all-powerful, incomprehensible being beyond all space-time, though most versions of the Bible explicitly say God created man in His image, meaning God would look like a human, if viewed literally, and Christians do traditionally believe he took the form of a man), so this trope may exist out of respect to such traditions.

C. S. Lewis wrote a novella called The Screwtape Letters, detailing the correspondence between a mortal human's literal "personal demon" and that demon's supervisor. In a commentary about the story, Professor Lewis wrote that he wanted to include similar letters between the demon's opposite number, but claimed that it was far too difficult to get into an angel's mindset to do so. The existence of this trope may well be partially explained by similar limits experienced by other authors.

Another alternate explanation is that in most cases He knows the heroes don't actually need His help, so He doesn't give it. Another reason is that God might easily become the ultimate Invincible Hero or Deus ex Machina (in fact, the very name Deus ex Machina came from the habit of Greek and Roman plays to have one of the gods come down from the heavens to fix up the mess the others had created), so the writers need to get rid of him. Possibly justified if people are significantly harder to make bad than good.

Compare Black-and-Gray Morality, where evil exists yet good does not, and the best you can hope for are flawed "heroes" who are (barely) better than their foes.