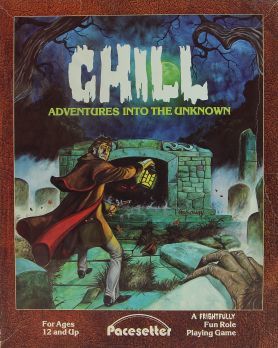 Chill was a somewhat lesser-known horror RPG, originally published in 1984 by Pacesetter, then released to a second edition in 1990 by Mayfair Games. In 2015 yet another edition came out courtesy of yet another company, this time Growling Door Games, which sadly folded quite quickly.

In Chill the player characters are sometimes called away from their routine lives to investigate cases by the secret society known as S.A.V.E. ("Societas Albae Viae Eternitata" note  "The Eternal Society of the White Way" as given by the game. The second edition swaps the A for "argenti/silver". ). The organization reaches out to people who survive a harrowing encounter with a paranormal being, then asks such people to investigate on its behalf into incidents involving other supernatural dangers (collectively referred to as "the Unknown"). The most gifted members of S.A.V.E. can even learn to wield the power of "the Art", a nebulous conflation that's a bit magic, a bit Psychic Powers.

The game is a little more optimistic than others in its genre, as the players belonging to an organization that actively hunts down the supernatural might suggest. The odds are certainly stacked in the monsters' favor, but careful investigation can unearth their Achilles' Heel and allow the players to halt a great danger.

Tropes found in Chill include: