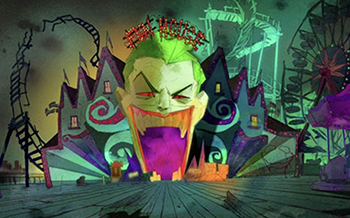 The Joker: Well, it's garish, ugly, and derelicts have used it for a toilet. The rides are dilapidated to the point of being lethal, and could easily maim or kill innocent little children.
Estate Agent: Oh. So you don't like it?
The Joker: Don't like it? I'm crazy for it.
— Batman: The Killing Joke
Advertisement:

An Amusement Park without the amusement, unless you are amused by Everything Trying to Kill You. Maybe the place has been abandoned for years, everything covered in filth and on the verge of falling apart. The rides are old, rusty, and creak eerily in the wind; if they still function at all they are horrifying deathtraps. Or maybe the park merely has been... refurbished by a new owner or owners; the place seems quite normal until the roller coaster brakes fail and the monster house turns out to be filled with lethal traps or real monsters... or both.

Whatever the case, there is something unspeakably wrong with that amusement park, except of course if you happen to be a Monster Clown, Serial Killer, Clown Serial Killer or some variety of Eldritch Abomination, in which case you can go right ahead and make yourself at home. Even better when the Abomination IS the amusement park.

May have started life as Souvenir Land before it went deadly. Brother trope to Circus of Fear.

Truth in Television to an extent, since abandoned fun parks are eerie on a level usually reserved for abandoned hospitals, prisons, and asylums and likewise suggest a terrible or supernatural presence lurking in wait for the unwary.

Sub-Trope of Pleasure Island. Compare Abominable Auditorium, where the theatre is either broken, dangerous or all of the above. Contrast with Crappy Carnival: it might still be creepy, but the only thing that's dangerous there is the food.