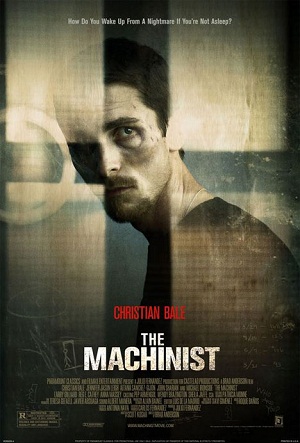 The Machinist is a 2004 film starring Christian Bale, directed by Brad Anderson (of Session 9 fame). It's one part Kafka Komedy, one part psychological thriller, and two parts surrealist drama, playing on themes from (and, at times, directly quoting from) Crime and Punishment, Taxi Driver, Fight Club, and German Expressionism.

Trevor Reznik (Bale) suffers from a severe case of insomnia: He claims that he hasn't slept in a year. He spends his days ignoring his landlady and compulsively washing his hands with bleach. He enjoys his regular visits to a sweet prostitute girl named Stevie (Jennifer Jason Leigh), who absolutely adores him, and he finds a little bit of romance with airport bar waitress and single mom Marie. During the day, Reznik works at a factory where he sleepily operates heavy machinery. When the inevitable happens and a coworker's (Michael Ironside) arm gets torn off, Reznik ends up in a emotionally destructive downward spiral, and quickly starts losing his mind.

The film very deliberately references the stories that it's based on and aims to be a collage of different techniques and atmospheres. To achieve this, it combines Chiaroscuro visuals with a musical score and camera techniques that evoke the 1950's, creating a kind of Anachronism Stew of editing methods. Bale's performance is an absolute tour de force, and the end result is a haunting, gorgeous film that tells its story in a clever yet familiar way.

To play Reznik, Christian Bale famously lost 28 kg (63 lbs) to look like an emaciated shell of a man. He described the experience of near starvation as strangely peaceful. About six months after that harrowing experience, Bale bulked up to truly superheroic dimensions to play Batman (before losing weight again to appear in The Fighter.)