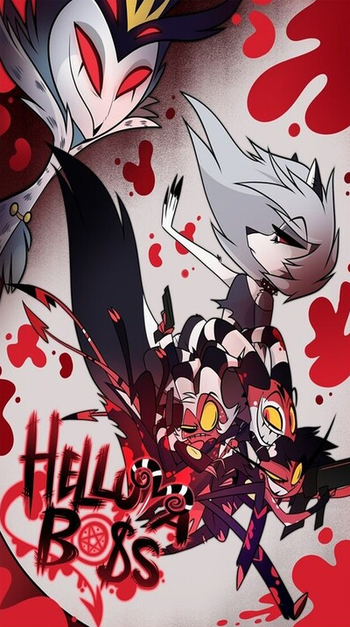 Helluva Boss is an adult animated musical Horror Comedy web series created by Vivienne Medrano, and is set in the same universe as Hazbin Hotel. Brandon Rogers co-writes most of the episodes alongside Medrano (and his Creator Thumbprint is very noticeable), Richard Steven Horvitz handles voice direction, and Jefferson Friedman composes the soundtrack (with additional music composed by Parry Gripp and Sam Haft).

The story follows Blitzonote the 'o' is silent (Rogers); an energetic, slightly dim imp hitman who owns a startup assassination company in Hell, which specializes in traveling to Earth to kill living humans on behalf of the dead, as revenge for (real or perceived) wrongs when they were alive. Helping Blitzo on this as he attempts to manage his business is Moxxie (Horvitz), a weapons expert with a rather uneasy relationship with his superior; the Cute and Psycho bruiser Millie (Vivian Nixon), who strives for a balance between the thrill of the job and her love for Moxxie; and the receptionist/Blitzo's adoptive-daughter Loona the hellhound (Erica Lindbeck), who, quite frankly, would rather be anywhere else.

Together, they all attempt to survive the mayhem that follows them, as well as each other, as they try to keep their company afloat amongst the competitive market of Hell. Their actions won't go unnoticed, not least of which by Stolas (Bryce Pinkham); an owl-like prince of Hell that provided Blitzo with access to the living world through rather... questionable means that left him hungry for more. They also find rivals in the form of C.H.E.R.U.B, a trio of, well, cherubs from Heaven whose job it is to save mortals from eternal damnation, and D.H.O.R.K.S, a pair of...humans (who are dorks) who are intent to prove the existence of not only demons but afterlife creatures in general to the living world.

The show's pilot episode was released in November 25th, 2019, and its first season officially premiered on October 31, 2020, with the rest of the episodes periodically releasing over the following year. A second season started on July 30th, 2022, with Jonathan Freeman joining the cast as Stolas and Blitzo's respective fathers, Paimon and Cash Buckzo.

Unlike its sister show (which was picked up by A24), the whole series can be accessed for free on the creator's YouTube channel

Stella claims Stolas is a dead fish in bed to her friends, all while he's standing right beside them.

Example of:
Lie Back and Think of England

Stella claims Stolas is a dead fish in bed to her friends, all while he's standing right beside them.