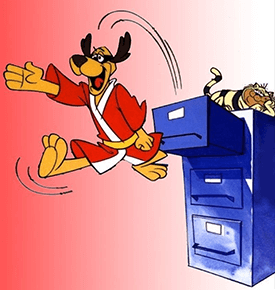 Hanna-Barbera produced this Animated Series for ABC in 1974 as a response to the Chop Sockey martial arts fad of that time, especially the Adventure Series Kung Fu.

The Hero, Hong Kong Phooey "number one super guy", posed as mild-mannered police janitor Penrod Pooch, and listened in on dispatcher Rosemary's responses to crime reports. It wasn't until Sgt. Flint took off after the criminal that "Penry", as he was called, engaged his Transformation Sequence. As his super-hero alter ego, Hong Kong pursued crooks in his shape-shifting Phooeymobile, accompanied by Spot the cat.

Despite HKP's impressive displays of martial arts, it was Spot who did most of the work and got none of the credit. Neither Sgt. Flint nor Rosemary ever suspected that Penry led a double life.

Scatman Crothers (no, not that Scatman) voiced the title character and performed the show's theme song. Later in the decade, Hong Kong Phooey joined Scooby-Doo's team on Laff-A-Lympics.