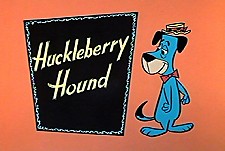 No noise, no tinkling of glasses' during the screening of THE HUCKLEBERRY HOUND SHOW.
Sign in a San Francisco bar in the late 1950s
Advertisement:

The Huckleberry Hound Show debuted in 1958 as Hanna-Barbera's second post-MGM original series (The Ruff & Reddy Show was the first). It was the first American all-cartoon show developed specifically for television as well as the first half-hour animated show and, in 1959, became the first animated TV show to win an Emmy. Voiced by Daws Butler, the easygoing Huck was shown in a variety of settings, from Arthurian England to (then) modern times.

Unlike Hanna-Barbera's other stars, Huck didn't have a regular supporting cast in his shorts, although he did have a handful of recurring antagonists, including Powerful Pierre. But his show did have two supporting segments: Yogi Bear and Pixie, Dixie and Mr. Jinks. When Yogi got his own series, his slot on The Huckleberry Hound Show was taken by Hokey Wolf.

In 1988, he got his own TV movie called The Good, the Bad, and Huckleberry Hound.

Example of:
Take Me to Your Leader