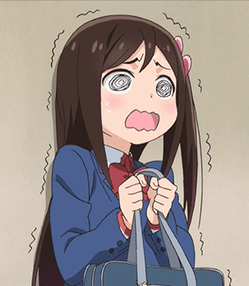 “What is that strange rattling sound?” I blurted out.
“Your knees rattling together,” was his simple and unflattering answer.
— The Fourth Law of Robotics by Harry Harrison
Advertisement:

In many forms of media, there are scenes that express a character's fear, whether it be from heights, or from entering an abandoned mansion. It is worth noting that at times, those characters will, as a result, tremble. Though it can be considered on the note of serious terror, once the sound effect of trembling is implemented, or once you notice that characters are shaking in the most exaggerated way possible, it seems as though those scenes are there for comedic effect. As a result, characters will often joke about the other character "shaking like a leaf", with the portrayal of one's teeth chattering or knees banging together adding to the comic relief (most prominent in Scooby-Doo).

A common feature for a Nervous Wreck. Compare Security Cling.