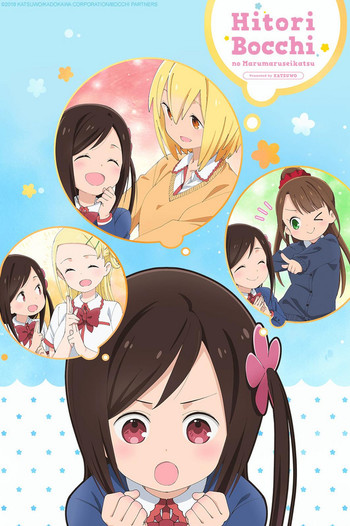 Bocchi Hitori is about to enter middle school. Her one and only friend, Kai Yawara, is going to a different middle school, leaving Bocchi all alone. What's more, Kai tells Bocchi that she's breaking off their friendship— unless Bocchi can befriend her entire class before graduation. Can Bocchi, a girl so incredibly shy that talking to strangers makes her pass out, really fulfill her promise to Kai? Or will she end up, as her name suggests, all alone?

Hitoribocchi no OO Seikatsu note Can be either translated as ''Hitori Bocchi's *** Lifestyle'' or ''The *** Lifestyle of Being Alone'', also known as Hitoribocchi no Marumaru Seikatsu, began as a comedic four-panel manga written and illustrated by Katsuwo (the creator of Mitsuboshi Colors), and was serialized in Dengeki Daioh "g" from 2013 to 2021.

An anime adaptation was announced at the end of the final episode of the Mitsuboshi Colors anime on March 24, 2018, and premiered on April 5, 2019. It is currently available for streaming on Crunchyroll, and can be viewed here

. The Manga ended in 2021 with the 8th and final Volume released in June 2021. However Katsuwo has continued to draw Bocchi and friends in daily drawings on their twitter page