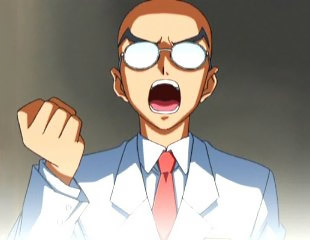 I swear that our cause will not fail!
Advertisement:

A Stock Pose where a character, usually a guy, proclaims something he is determined to accomplish, or to express pride, where he holds up his fist to his shoulder, palm facing inward, and the fist might even shake a little.

The girly version of this has the arm bent outwards while the fist still faces inward. A variation is to pump one hand all the way up with the other hand doing a downward pump as if stretching.

This is called "Guts Pose" (Gatsu Pozu) in Wasei Eigo

, which was apparently coined by Guts Ishimatsu

Being Hot-Blooded or a Genki Girl will make this pose more likely. It can be accompanied by shouting Big "YES!".

This is so common, that it's spoofed as often as it's played straight. Some parodies even have the guy crying Manly Tears of pride.

Do not confuse with the Handshake Substitute "Fist Bump".