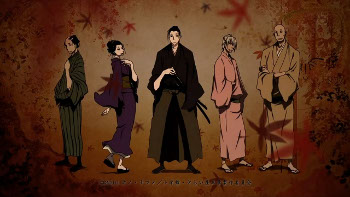 "When you're hungry, anything tastes good."
— Yaichi
Advertisement:

House of Five Leaves is a manga by Natsume Ono (creator of Not Simple, Ristorante Paradiso and ACCA: 13-Territory Inspection Dept.) which ran from 2005 to 2010 in the Seinen magazine Monthly Ikki.

The story focuses on a washed-up Rōnin named Akitsu Masanosuke (nicknamed Masa), who possesses great skill with a blade but also a timid personality that often causes him problems. After continually failing to find work in Edo, he meets a mysterious man named Yaichi (nicknamed Ichi) who takes a liking to Masa and offers him employment as his bodyguard. Yaichi is leader of a group called the "Five Leaves", which kidnaps the heirs of wealthy businesses and holds them to ransom. Though initially reluctant to participate in their shady activities, Masa finds himself becoming more and more involved with the other members, all of whom have their own secrets to hide.

Recognisable for its distinctive art style, it is a very beautiful manga with an intricate plot and fascinating characters that teach you that people are often far more than they first appear.

It was later adapted into a 12-Episode Anime by Manglobe in April 2010.

Not to be confused with House of Leaves.