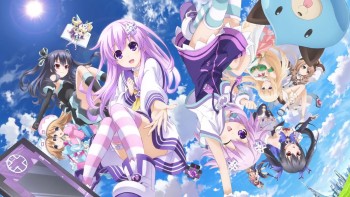 Taking place in an Alternate Continuity from the rest of the series, this anime takes place in a Gamindustri that has just signed a friendship treaty between the four nations, after constant war. The anime follows Neptune and a select cast of allies and villains from the series through an original story that mixes in heavily-compressed and heavily-altered variations on the plots of Hyperdimension Neptunia mk2 and Hyperdimension Neptunia Victory.

The series was animated by David Production as part of the Summer 2013 Anime lineup. The series is available for legal streaming in sub and dub by Funimation here

.note You need to register for a free account before it will let you watch due to age restrictions.

The series consists of 12 regular episodes, and an OVA unofficially referred to as the thirteenth episode. A second OVA, Nep's Summer Vacation 2019, was released on July 3, 2019 with a Blu-Ray of the original 13 episodes.

Note that there are spoilers from the games and unavoidable spoilers on this page, so You Have Been Warned.

In addition to those on the main page, this adaptation provides: