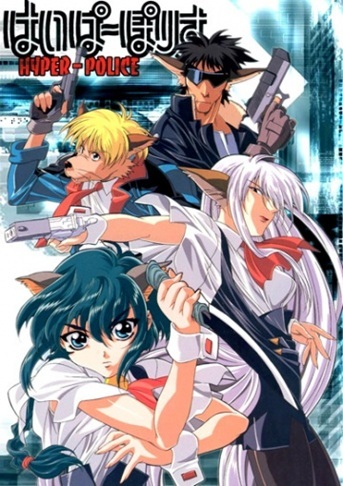 Hyper Police is a manga by Minoru Tachikawa that ran in Gekkan Dragon Magazine from 1993 to 2004. An anime adaptation aired in 1997.

The series is set in the twenty-second year of the new Holy Century, in a post-apocalyptic version of Tokyo , where humanity is an endangered species. The focus is mainly on the lives of the main characters, Natsuki Sasahara, a young cat girl, and her co-workers: fox girl Sakura Bokuseiinmonzeninari, werewolf Batanen Fujioka and his cousin Tomy Fujioka. The monsters are usually taken from Japanese mythology, updated for the modern era. In the anime, repeat criminal offenders in Tokyo have their memories wiped. However, in the manga version, they are castrated. Mithril exists in this world as a sort of specially enchanted silver that is especially effective against supernatural characters.