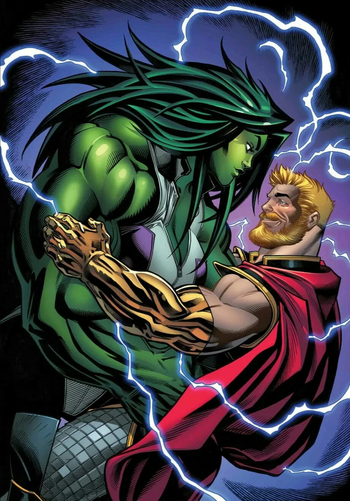 Sometimes they want Thor, too.
"A high-ranking matriarch, in a society that oppresses men, falls for the Hero's rugged charms."
— Item #52 of the The Grand List of Overused Science Fiction Clichés (Section III)
Advertisement:

Most Amazon-type female societies avoid the male sex but a certain manly type of hero is capable of winning over these tribes of women, even their leaders.

Ironically, this trope may occur out of a misplaced if well-intentioned desire to make a beloved character's intended just as good as they are rather than the significant other being 'helpless'. Thus, a twist on this trope is where a female character conveniently never runs into a situation where this scenario is fulfilled, thus technically pleasing anyone still using this cliché and also those who hate it.

This trope is Older Than Feudalism: in Greek Mythology, Hercules is sent on a quest to the land of the Amazons in order to steal the golden girdle of Hippolyta. The Library of Apollodorus first tells the version in which the two of them battle to a stalemate and the queen is so impressed with him she gives it up freely (in fact, Hercules may well have married her if Hera hadn't been so intent on making his life a living hell).

Compare Women Prefer Strong Men, where the focus of the attraction is on the man simply being strong for a man rather than stronger than the woman. Also see Best Her to Bed Her, Amazon Chaser. Related to The Worf Effect or Faux Action Girl (depending on how powerful the women really are). See Never a Self-Made Woman. The evil version of this is sometimes Villainesses Want Heroes. The polar opposite of Weakness Turns Her On. Related to Love at First Punch, when the Amazon first meets her Hercules, and Battle Couple, which also involves both partners being capable fighters without the man necessarily being stronger.

This trope is not universal enough for aversions to be meaningful; examples saying "averted in..." will be mowed down like grass.