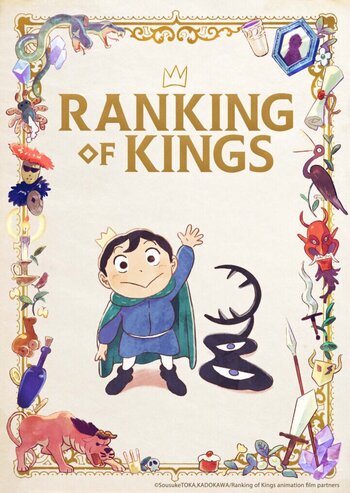 Now run far
Your dirty shoes and footprints
Will head steadily into the future
Panting with exertion
You shine brighter than anyone!
Advertisement:

Ranking of Kings (Ousama Ranking) is a fantasy adventure manga created by Sosuke Tooka. It began publication in the online anthology Manga Hack under Creative Entertainment in 2017, and from 2019 onward the series started to get physical manga volumes published by Enterbrain. In 2021 it received a 23-episode television anime produced by WIT Studio.

The story follows Bojji, the son of a mighty king in a world where it's expected for kings to be fearsome warriors who fight on the front lines. Unfortunately for him, despite being the firstborn son and thus heir to the throne, everyone expects and wants his half-brother Daida to become king because Bojji is physically weak and deaf.

His tireless efforts to beat the odds earn him the loyalty and respect of Kage, a Living Shadow and the last member of the shadow clan. The two of them must work together if Bojji is to have any hope of becoming king.

Ranking of Kings provides examples of: