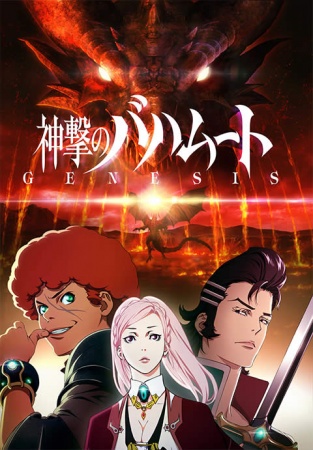 Rage of Bahamut: Genesis, is an anime which began airing in the Fall 2014 Anime season, animated by MAPPA of Terror in Resonance and Kids on the Slope fame. It serves as a prequel to the Video Game Rage of Bahamut.

Mistarcia is a magical world where humans, gods, and demons mingle together. In the past, the black-and-silver-winged Bahamut has threatened to destroy the land, but humans, gods, and demons overcame their differences to fight together and seal its power. The key to that seal was split in two, one half given to the gods and the other to demons, so that they would never be united and Bahamut never released. Now, two thousand years later, the world is in an era of peace — until the day a renegade demon steals the gods' half of the key.

The plot follows Favaro Leone, a roguish Bounty Hunter working for the eccentric god Bacchus, and his friend-turned-mortal-enemy, Kaisar Lidfard, a fallen knight turned Bounty Hunter, as they escort said demon, Amira, to the realm of Helheim, whilst Heaven, Hell, and the mortal world alike do their level best to stop them.

was confirmed in May 2015,and aired during the Spring 2017 Anime season. Titled Virgin Soul

, it is set ten years after Bahamut's most recent defeat by the alliance between Mankind, Heaven, and Hell. The protagonist this turn around is a 16 year old girl named Nina Drango, who can transform into a dragon whenever she gets too excited. She finds herself stumbling into the continued conflict between demons, humans, and angels, with a human king antagonizing both supernatural sides for yet unknown reasons.

The series also has a manga adaptation, titled Shingeki no Bahamut: Twin Heads. It's still focused on Kaisar and Favaro as they go through the country.

The Rage of Bahamut seasons provide examples of: