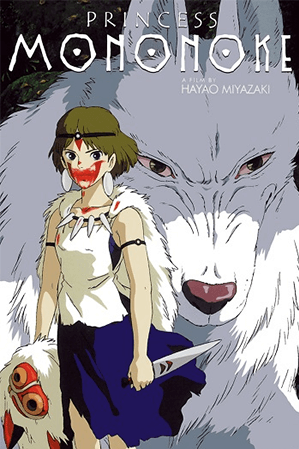 The Fate of the World Rests on the Courage of One Warrior.
"In ancient times, the land lay covered in forests, wherefrom ages long past, dwelt the spirits of the gods. Back then, man and beast lived in harmony. But as time went by, most of the great forests were destroyed. Those that remained were guarded by gigantic beasts, who owed their allegiances to the Great Forest Spirit. For those were the days of gods—and of demons."
— Lord Okkoto, the film's first opening scene
Advertisement:

Princess Mononoke (もののけ姫 Mononoke Hime) is an acclaimed 1997 animated film from famed Japanese director Hayao Miyazaki, originally intended to be his last until Spirited Away. It's notably one of his darkest films, with a somber ambiance and themes, but still features the trademark stunning visuals of a Studio Ghibli production. Appropriately enough, it was also the first Ghibli film to earn a PG-13 rating in the United States. Joe Hisaishi composed the score while author Neil Gaiman adapted the film's English dub.

The story is set during the 15th or 16th century (late Muromachi period) and begins in a small village of the Emishi, the indigenous inhabitants of Japan who by this time have mostly been conquered or driven into hiding in remote corners of the east. The village's peace is shattered by the attack of a terrible demon; their last remaining prince, Ashitaka (voiced by Yōji Matsuda), is injured during the fight against it, and even worse, the mortally wounded demon is revealed to be a powerful spirit—a giant boar that curses the Emishi with its last breath and reveals that the wound Ashitaka suffered will kill him too. The village elders decide, with much reluctance, that Ashitaka must leave the village before the curse takes full possession of him, and travel west in search of his destiny. Ashitaka leaves immediately, with only his trusted red elk Yakult. The young prince follows the demon boar's trail of destruction with the only clue he has about what transformed it into a demon: an iron ball found embedded in its body.

Ashitaka travels through the war-torn countryside, discovering that his curse has also imparted superhuman strength along the way. He eventually comes upon Tataraba (Iron Town), a mining settlement on the edge of the wilderness that's in the midst of a three-way war between the strong-willed Lady Eboshi (Yūko Tanaka) (who protects the town through the use of firearms), the spirits of the forest (who want to stop Iron Town's expansion to protect their homes from destruction), and an influential samurai warlord (who wants to seize the town for the wealth it generates). Ashitaka must endeavour to create peace between the various sides, understand the reason behind his curse, and connect with San (Yuriko Ishida), a human girl who was Raised by Wolves and fights alongside the spirits as events seem to be heading towards an inevitable disaster.

It was the final Ghibli film to feature key animator Yoshifumi Kondo, who died one year after the film's release.

has nothing to do with the anime Mononoke.