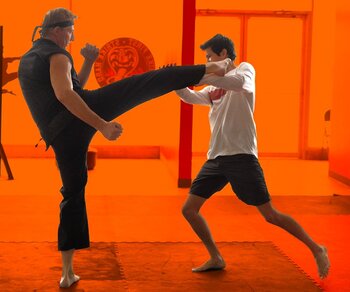 Here we are, Born to be Kings...
Advertisement:

A Fighting Series, as its name suggests, is one that places a lot of emphasis on fighting. Different fighting styles and learning new moves and abilities are a major part of the plot. There will be lots of emphasis on training, technique, and practice. The main character often, though not always, wants To Be a Master; whether he does or not, he usually is by the end. Common in Chinese movies from the 1970s and ubiquitous in Japanese Shōnen anime/manga.

Note that simply having a lot of fighting does not mean that a show is a Fighting Series; in order to qualify, the fighting has to be integral to the plot, rather than a means to an end.

Related to the Martial Arts Movie. See Fighting Game for the Video Game equivalent. Should not be confused with Dueling Shows. For fight scenes happening in one of these series, take a look at Fighting in All the Wrong Places Index. Also see This Index Knows Kung Fu.

Common tropes in this genre include: