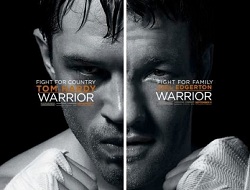 2011 film starring Joel Edgerton and Tom Hardy as a pair of estranged brothers who enter a Mixed Martial Arts tournament, each for their own reasons. Also stars Nick Nolte as their father, a retired, recovering alcoholic boxer.

The film opens when the younger brother Tommy (Hardy) returns to Pittsburgh after leaving with his mother years ago to escape his father's out-of-control alcoholism. He begins working out at a local gym and asks his father Paddy (celebrating 1000 days on the wagon) to train him for the Sparta tournament, a 16-contestant, single-elimination MMA tournament with a winner-take-all $5 million purse. Tommy's got a few demons in his past though, and it turns out he's not just in it for the money.

When Tommy left, his elder brother Brendan (Edgerton) moved Philadelphia for the sake of his future wife. He is a former UFC fighter, but has retired and now teaches high school physics. He's having trouble making ends meet however, and his house is on the brink of foreclosure, so he starts fighting again to supplement his income. Turns out the school board doesn't approve of him moonlighting as a cage fighter, so he ends up suspended without pay from his teaching position. He knows it's a longshot, but if he can win the Sparta tournament, he'd be able to keep his house. This, of course, puts him on a collision course with Tommy, who still resents him for staying with their father while Tommy took care of their ailing mother.

Unrelated to the comic book.