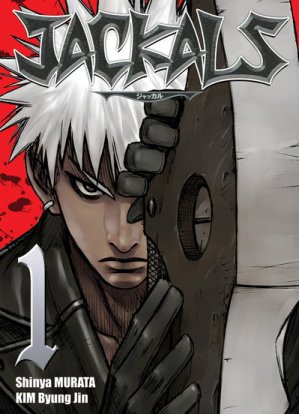 Alligator Nichol, the son of the Grim Reaper herself
Advertisement:

Jackals is a Manganote Yes really, some mistake it as Manhwa due the artist being Korean, it is only partially drawn in Korea, but the final touches and publication are all in Japan written by Shinya Murata and drawn by Byun-Jin Kim. It chronicles the life of a mercenary named Nichol, son of another mercenary, in Friedrichs town of Cicero City, which also houses other mercenaries generally grouped under the titular Jackals and two major gangs, The Mafia-like Gabriella and the Triad-like Tennouren. The story kicks off when Nichol, after finishing one of his jobs, is assaulted by a Gabriella executive and kills him in retaliation, causing the rest of Gabriella to hunt him. However, they are impeded by the ever-growing Tennouren, who just loses their former leader who is swiftly replaced by his genius daughter. Soon Nichol is caught in the gang war between Don Salieri and Lei Meilang, and must fight to survive as he has done all his life.

The Arachnid manga later written by Murata stars an expy of a character from this story and is confirmed to be a Stealth Sequel. His other works also tend to borrow from this one.