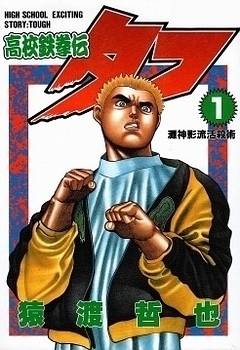 High School Exciting Story: Tough, or Koko Tekken-den TOUGH as it's known in Japan, is a Seinen manga written and illustrated by Tetsuya Saruwatari who was also responsible for the artwork of the popular and notoriously violent manga Riki-Oh. HSE:Tough revolves around Kiichi Miyazawa, a 17 year old high school student who is the heir to the secret Nadashinkage-ryu fighting style that was passed down to him from his father Seiko. The Nadashikage-Ryu is a fighting style that utilizes the user's knowledge of and hitting of an opponents vital organs and pressure points in such a way it can outright kill the opponent if the user isn't careful enough.

The series revolves around Kiichi's goal to become strong by defeating even stronger opponents in what are essentially Death Matches though almost no one Kiichi fights actually dies (permanently anyway). The original series ran for 42 volumes which ran in Young Jump from 1994-2003. It was popular enough to get a 3 episode OVA adaptation titled Shootfighter Tekken which covers a small fraction of the first arc of the manga, a sequel to the original manga simply titled "Tough" which is finished in 2012, along with a side-story that revolves around Kiichi's father Oton.