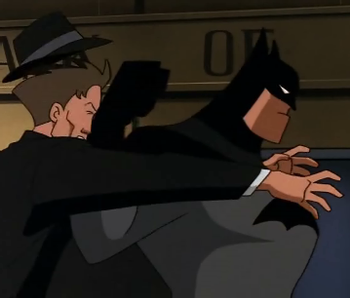 He does it so often, he didn't even notice.
"Hold it there! You're doing the old 'Frozen Take' bit, which means that Doug the Dog... *CLONK*... was right behind me. Heh-heh-heh-heh!"
— Slappy Squirrel, Animaniacs

Being a Mook is a hard (and short) life. If you're not constantly getting killed, you're getting knocked out by the Hero.

Some Mooks, instead of following the rules of Mook Chivalry, try getting smart by sneaking up on the hero when he's busy fighting another fellow Mook or while in conversation with someone, and striking him from behind.

Sounds easy, right? He's not even looking your way, throwing punches or talking. All you have to do is be silent... just a little closer...

Nope, not only do you still get knocked out (or shot down), the Hero doesn't even give you the courtesy of looking your way first. And of course, you just made him look that much cooler.

Compare Foe-Tossing Charge, only even more humiliating for the poor sap on the receiving end. Also compare Dangerous Backswing, which happens in a combat situation and may or may not be accidental. Very commonly featured in a work that is Rated M for Manly. Users of this move tend to have a Badass Back. There is a certain amount of Truth in Television to this: The reverse kick is a fairly viable move.

See also Excuse Me While I Multitask. Has nothing to do with Backhanded Apology.

The man who Shaggy MuggedForDisguise is about to get payback...or not.

The man who Shaggy MuggedForDisguise is about to get payback...or not.