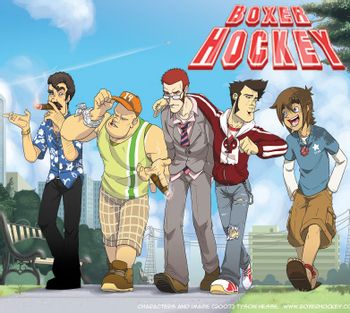 is a webcomic created by Tyson Hesse, starting in 2006. It updated Biweekly on Wednesdays and Sundays, and follows a team for a fictitious sport called Boxer Hockey. The comic mostly focuses on the team's lives outside the games, but also has the games in separate arcs.

Since 2009 updates became more sporadic, going on frequent hiatuses. After its original hosting site went offline the comic in its entirety is currently archived on the official tumblr page

, with its last page being from 8/23/2014. As of 2015 Tyson Hesse has officially made it clear that the comic is no longer active, and unlikely to resume in the forseeable future due to his many ongoing professional projects.

Note that any other links on this page will go to the down host site.