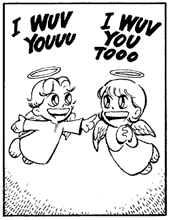 Some romances are painful, others are dead, a few are happy, and then there are those which are... cute.

They use pet names that even Fluffy the Terrible winces at, cuddle and giggle incessantly, never argue (unless you count their "you're cuter" exchanges as such) and basically turn all nearby salt into sugar. They might sometimes wear Coordinated Clothes to make sure everybody notices they belong together. Usually, they're as indestructibly upbeat as you think. Other times, the show will delight in giving them one tiny imperfection, problem, or Single-Issue Wonk that makes them turn into The Masochism Tango.

To be fair, almost all relationships go through a "Honeymoon Phase" in the first few months of dating, where the couple can do nothing but sing each other's praises, much to the annoyance of their friends, families, and coworkers (especially the single ones). But after a while, passions cool as the couple integrates the relationship into their everyday lives. Granted, you do have those couples who never stop laying it on thick. A Sister Trope to Make-Out Kids, when a couple makes others feel uncomfortable by being very affectionate in public, and Insatiable Newlyweds, when tying the knot starts up the sugar rush all over again. The bane of every Affection-Hating Kid.