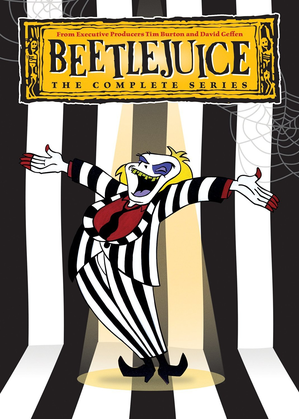 "It's showtime!"
Though I know I should be wary,
Still I venture someplace scary.
Ghostly haunting I turn loose:
Beetlejuice, Beetlejuice, BEETLEJUICE!
— Lydia Deetz
Advertisement:

Meet Lydia Deetz, a Perky Goth girl attending a private school in a sleepy little Connecticut town while trying to deal with her well-meaning but eccentric parents. One day she comes across Beetlejuice, the manic self-described "Ghost With the Most", who befriends her and whisks her off from her ordinary life into frequent adventures in the Cloudcuckooland world of the Neitherworld. Hilarity Ensues on a regular basis.

Based on the hit movie of the same name, the animated series was produced by the Canadian studio Nelvana and aired for several years on ABC and Fox Kids. Its original run lasted from September 1989 to May 1992, with a total of 109 storylines in 94 episodes - which, in Recycled: The Series terms, is equivalent to about 10 years. It bore only a passing resemblance to the film: the Maitlands, the straitlaced protagonists, and Juno the Caseworker were eliminated entirely. With Beetlejuice as the main character, this ends up making the entire series something of a Villain Episode.

Since it was a children's show, despite many characters being technically dead, very rarely was the concept of actual mortality brought up. Beetlejuice's antics became more greed- and prank-based, and instead of a complete Jerkass, he was shifted into more of a family-friendly, moderately well-meaning Jerk with a Heart of Gold. The Dirty Old Man aspect of his personality was cut almost completely, and most of their adventures took place in Beetlejuice's ghostly home dimension - the Neitherworld. Rather than the bureaucratic nightmare that was the Afterlife from the film, the Neitherworld was inhabited mostly by outrageous monsters with ironic quirks, including a skeleton who wants to be a bodybuilder and a spider with dreams of dancing.

Obviously, the most ironic thing about the show is that if you were old enough to have seen the movie, you probably weren't in the same age group that the cartoon was aimed at. A notable aspect of the show, however, was that Tim Burton, director of the film, was involved as a producer, while Danny Elfman did the theme music (a re-orchestration of the film's theme). As a result, despite all the changes, the show maintained a lot of the same manic energy and clever visuals as the film and many of its jokes were recycled throughout the series. Beetlejuice is generally considered one of the better film-to-TV translations because of this. Admittedly, this feat isn't hard to pull off, but it is rare for a movie made for older audiences to be adapted into a Saturday Morning Cartoon and balance adult content with kid-friendly content.

The cartoon versions of Beetlejuice and Lydia, along with several of the supporting cast, were spun off into a video game for the Game Boy, a handful of short novels ("ghostwritten" by B. J. Specter), and a short comic book run from Harvey Comics.