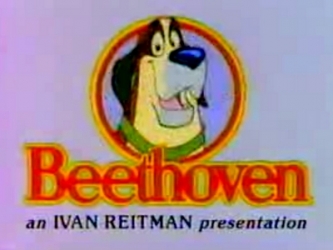 The animated Spin-Off of the 1992 film featuring a St. Bernard as its title character. In the animated series, Beethoven could speak, but only to his fellow canine friends, who were exclusive to the series. Also, there was a Guinea pig named Mr. Huggs who wasn't in the movie.

Developed for television by the creators of Recess and Universal Cartoon Studios. A total of 26 episodes were aired on CBS Saturday Mornings between 1994 and 1995.

The series had most of the episodes released on home video during the shows run, but they were out of print afterwards. The series is now free to watch online through Universal's Peacock service.

Tropes found in the cartoon series: