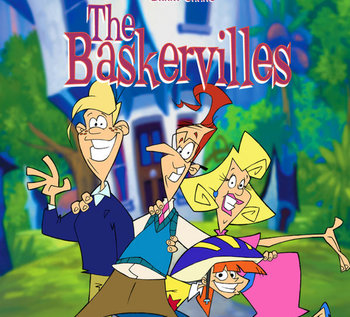 The Baskervilles from left to right: Darren, Brian, April, and Janet
Advertisement:

The Baskervilles is a British/Canadian animated series created by Alastair Swinnerton and Nick Martinelli and produced by Cinar in association with Carlton Television and Teletoon. The show lasted for 2 seasons and had a total of 26 episodes between March 10 andDecember 13, 2000.

The show focuses on the Baskerville family, your typical nice quiet middle-class British family made up of the unbearably nice parents Brian and Janet, their goody two-shoes teenage son Darren, and their precocious daughter April, who is anything but sweet. One day, the family are invited by an evil devil-like billionaire named Nicolas Lucifer III (aka "The Boss") to move to his Hell-like theme park known simply Underworld: The Theme Park ("Where Good Is Bad And Bad Is Good"). The Baskervilles eagerly accept the offer, oblivious to the fact that Nicolas intends to turn them bad as part of his realization of Hell. However, little does The Boss know that he's bitten off more than he can chew because not even being in the literal Theme Park Version of Hell with monsters and demons for neighbours can break the cheerful and optimistic spirits of the Baskerville family (or the evilness of their daughter).