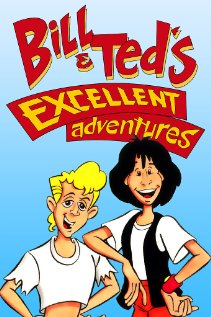 "Whenever time stands and trouble moves too fast/To save the future, we must learn about the past!"
— Opening theme
Advertisement:

Bill & Ted's Excellent Adventures is an Animated Adaptation of the Bill & Ted movies that aired as a Saturday Morning Cartoon on CBS and Fox for two seasons, from 1990 through 1991.

A Short-Runner Live Action adaptation was also produced with the same name and aired on Fox in 1992.