Where No Parody Has Gone Before 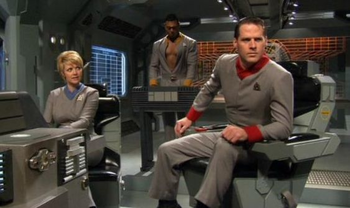 "Can we... reverse the... polarity?"
Butt-Head: Fire those retro rockets, shoot the fruit-on torpedoes, and like uhh, make us go that way. (Butthead looks up at an imaginary Counselor Troi, standing next to him) Uh, excuse me? I order you to undress and show me your thingies.
Beavis (walking into frame): But Captain! That violates intergalactic law! ...or, or something. Hehehe...
Butt-Head: Number One, I order you to take a number two.
Advertisement:
Beavis (saluting): Aye-aye, captain!
Butt-Head: Uhh, hehe, this is cool.
— Beavis And Butthead

...Actually, they have. Several times.

When writers of sitcoms, whether they are animated or live action, are creating an episode that will contain elements of Science Fiction and/or the culture that follows it, they will try to show that they are just like us by cramming in references to every known science fiction television show and movie, especially Star Trek (particularly Star Trek: The Original Series, the first and best-known part of the franchise). When dealing with a parody of Star Trek, the elements most commonly found are:

Compare May the Farce Be with You, which is the same thing, but with Star Wars. May involve Critical Research Failure if done painfully bad.

A subtrope of Stock Parodies.