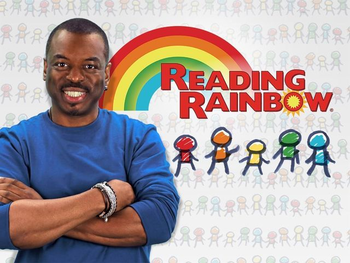 "Take a look, it's in a book..."
"I think reading is part of the birthright of the human being."
— LeVar Burton, actor and children's literacy advocate.
Advertisement:

American children's Edutainment Show that aired on PBS from 1983-2009note The last new episode was made in 2006., and whose goal was simple — encourage children to read. It was hosted by co-creator LeVar Burton (yes, that LeVar Burton).

Each episode featured a children's story, usually narrated by a celebrity, that focused on a specific theme (i.e., the importance of teamwork or learning about dinosaurs). The show would explore the theme further through various segments, live-action and animated. The last segment of the show would feature children providing recommendations of other books to look for at the library, preceded by LeVar saying "But you don't have to take my word for it." Every show ended with "I'll/We'll see you next time."

This show was part of PBS' "triple crown" of children's programming in The '80s and The '90s, along with Sesame Street and Mister Rogers' Neighborhood. It would be difficult indeed to find an American of a certain age who didn't watch this program at least occasionally, if not regularly. It's in the same sacrosanct category as Rogers — rarely parodied (but if it is, it's always the positive kind), and insulting it will cause swift and nasty responses.

Rainbow won a Peabody Award and 26 Emmys, and ended its run as the third longest-running children's program in PBS history (behind the aforementioned Sesame Street and Mister Rogers' Neighborhood).

Five years after the show ended, Reading Rainbow has made a comeback of a sort, as an internet-based outreach project. The project was started in 2012 with the goal of making Reading Rainbow content available on the iPad to everyone in the world. But as it progressed, feedback came in asking for the app to be available to more than just the iPad, and their ambitions grew, and the existing funding method of an optional low monthly fee for premium content proved to be insufficient (since said fee was already being used for funding the server space and content royalty). A Kickstarter campaign

for the project was started, and it reached its $1,000,000 goal before the first day was finished. As you can imagine, Burton is overwhelmed by this support

. In all, the project received over $5.4 million in donations and set a record for most individual backers

for a Kickstarter campaign.

, however at this time almost all content has been removed and the future of the above-discussed efforts is in flux due to an ongoing lawsuit

by producer/PBS station WNED alleging that Burton is capitalizing on the show's name, having hosted the show but not actually owning the rights to it (LeVar had thought that he had bought out the entire franchise, which turned out to be incorrect). In October 2017, however, WNED announced on the show's official website

that "Recent legal disputes between WNED and LeVar Burton/RRKIDZ have been resolved and RRKIDZ no longer licenses the Reading Rainbow brand from WNED. WNED is currently working on the next chapter of Reading Rainbow and will continue its mission of fostering education for a new generation." Time will tell whether backlash will have any effect on this reboot, as WNED did ruffle the feathers of a number of fans of LeVar's, and that nothing further came out of it as of 2019.

In 2018, Burton started a podcast entitled simply LeVar Burton Reads. The podcast is very similar in format, except that it's audio-only and features more mature stories rather than children's literature. It also came under fire in the lawsuit for Burton describing it as "Reading Rainbow for adults" (he no longer does, but fans do with impunity) and because WNED claimed copyright infringement over the phrases "you don't have to take my word for it" and "I'll see you next time" (unsurprisingly, they lost that one).

"We'll see you next time."
Feedback