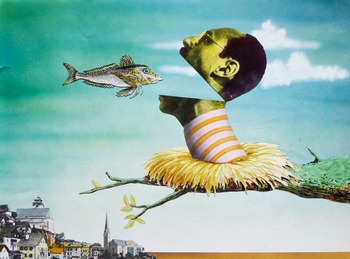 Something seems fishy about this picture.
The cheapest way to create an animated short is, simply put, not to animate it at all. Rather than actually creating a new set of cel animation drawings, you can simply take some existing piece of clip art and just sort of... move it around on the screen. It doesn't have to look realistic; in fact, the more obviously fake, the funnier it will be. While this is sometimes done for Stylistic Suck, it can sometimes be done to give the impression of a comic book.
Advertisement:

While forms of this have been around for as long as film, it was until recently mostly associated Terry Gilliam's sequences in Monty Python's Flying Circus and the subsequent films. Now, however, with the explosion of web-based video collages, the techniques have become democratized, and entire new genres based on it have arisen.

Compare and contrast Battle of the Still Frames.