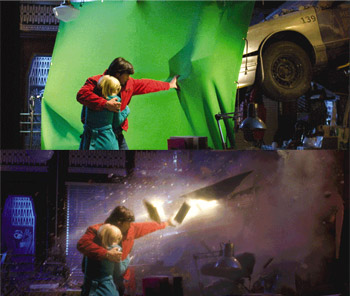 "He has the power to rear-project major cities!"
— Mike Nelson on The Pumaman
Advertisement:

More commonly known as green screen, the process by which a subject filmed on a camera can be seamlessly inserted into a scene generated by other means. It relies on filming the subject in front of a solid-color background — usually green or blue — and causing the editing system to replace that color with the background signal.

This technique is Older Than They Think. Before the existence of computer editing, the effect could be achieved using rear projection, double-exposing the film, or a Matte Shot.

The technique is usually used to composite the subject into a computer generated environment, but other live action footage, matte paintings, traditional animation, or some combination of all can be used also.

The color used is now entirely arbitrary. Blue was a popular choice in the early days of color motion pictures, because it is complementary to the reds found in human skin. Green became popular because digital editing systems can isolate green with less light in the background, and because lime green is less common than bright blue in costumingnote  There were also a few actors who also had Blue Screen-colored eyes; Broken Arrow (1996) offers an example, where an astute viewer can occasionally see special effects in John Travolta's irises. Magenta is sometimes used, as is black, but the latter is problematic, as it's almost impossible to shoot a person without having some black visible on their person, in eyes or shadows.

If any part of an actor or prop is colored the same as the background, that part will disappear. Thus, sometimes the background color is chosen because of the colors to be used in the foreground action. The original run of Doctor Who, for instance, used green or yellow backgrounds even when blue was the most common color at The BBC, because a large number of its effects shots involved the TARDIS, a timeship that takes the form of a blue police phone box. The problem with using yellow was that foreground objects and actors always had a prominent yellow fringe around them. Normally, wardrobe and prop designers simply avoid using greens in the capture range, but this is not always possible; you'll occasionally see bloopers where weather forecasters have part of the meteorology map show up on their ties, for example.

The invisibility effect can be used intentionally to allow a performer, or part of his body, to interact with props while remaining unseen. A garment that can be used for this purpose is a one-piece jumpsuit in the background color, with a full-face mask, and a mesh eye piece, called a "gimp suit" or, in the case of a blue background, a "blueberry" in the trade. Performers in recent Jim Henson Productions shows have used these suits to perform with puppets without having to raise them above their heads. The suit looks like a Ninja outfit, and that is not a coincidence, as it serves the same purpose as the black outfits traditionally worn by Japanese stagehands. See notes at Ninja.

Almost all productions use Chroma Key at some point, but there are some standout examples. Also notable for causing occasional unintentional hilarity - when background and foreground are poorly matched, or the visual effects budget is low, the effect is anything but seamless.

It can be fairly tricky to create a viable Chroma-Key effect, especially with amateur equipment — often, it requires fiddling with hue and saturation, and even then, there is often a faint, tell-tale 'border' around the subject where the green-screen footage and the 'real' actor don't match up.