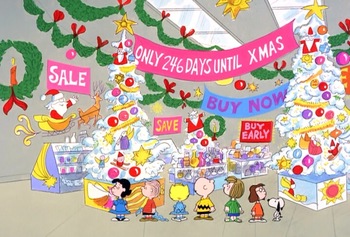 The Peanuts gang witness Christmas in April. Poor Easter...
"Christmas is so big, it's starting to eat other holidays. Watch out, Halloween!"
—Jon Stewart, The Daily Show

A phenomenon which can be found any place where Christmas is celebrated but is most extremely prevalent in North America, Christmas Creep refers to the tendency of Christmas-related merchandise — along with seasonal decorations, music, television programming, and so forth — to start appearing earlier and earlier each year.

Prior to The '80s, the Christmas retail season in the U.S. didn't start until after Thanksgiving Day (although Christmas catalogs for JCPenney, Sears, etc. have been mailed as early as August since at least The '70s). The Friday after Thanksgiving became the default day to start the Christmas shopping season, and stores responded with big sales on that day; it has since come to be known as Black Friday. The earliest known reference to this name dates to 1961 in Philadelphia, because of the huge traffic jams and crowds of shoppers. The phrase took on a darker meaning in The '90s, following several incidents where shoppers and store staff were injured or even killed in stampedes of people rushing through store doors trying to get the best deals.

Since the Turn of the Millennium, it's more or less universal that Christmas merchandise will take over as soon as the Halloween stuff is moved to clearance (though many grocery stores try to reserve at least some display space for Thanksgiving). And even when Halloween has the main "seasonal" aisles, some Christmas stuff will turn up by mid-October. Christmas Creep isn't just confined to the retail world, either: many radio stations that switch to an "all Christmas Songs, all the time" format now do so as early as November 1, for instance, and it's not unusual for homeowners to get a similarly early start on putting up their own lights and decorations. (Though in cold-weather climates, this may stem more from a desire to finish outdoor decorating ahead of the harshest winter weather. Many will set up and test the lights beforehand, but save an "official" turn-on time to Thanksgiving weekend.)

Moreover, this phenomenon has begun to affect all holidays that have opportunity for commercialization. It is no longer uncommon to see paraphernalia for an upcoming holiday appearing in stores as soon as (if not before) the previous holiday is over. Thus, Valentine's Day decorations have begun to appear in stores even before Christmas is over, with St. Patrick's Day material popping up by the beginning of February, Passover and Easter things at almost the same time,note though is this justified by the fact that both holidays can fall as early as late March, summer items as soon as Easter and Passover are passed, back-to-school promos as early as July,note  this too is justified by the fact that school can resume as early as August in some districts and Halloween items in July/August.

Recent surveys have revealed that Christmas Creep isn't all bad: Some people often report feeling excited for Christmas as early as March, and in the UK, many people flock to their television screens to watch the premiere of the next big-budget Christmas Advert produced by John Lewisnote a chain of department stores popular among the entirety of Britain, despite their perceived expensiveness and upper-class attitude by outsiders at the start of November each year.

See also Everyone Is Christian at Christmas, Do They Know Its Christmastime, and Santa Clausmas.

If Christmas Creep appears in media, it's generally Played for Laughs, poking fun at the earliness itself or mercilessly mocking the commercialism involved.

Has nothing to do with The Krampus, or the guy at the office Christmas party (you know, the one with the lampshade on his head) who has too much eggnog and forgets the concepts of "personal space" and "hands to yourself." That would be a Christmastime creep, since it's something a creep would do at Christmas time.