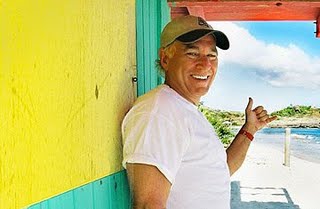 Think about the islands. Think about the clear blue skies and the sandy beaches. Think about escaping all the worries of your life, just relaxing in the shade, holding a rum-based umbrella-garnished cocktail that's been served in a coconut shell. Now think about what music would be playing in the background of all this easy living.

James Delaney "Jimmy" Buffett (born December 25, 1946) is an American singer-songwriter, restaurateur, and author. performing what he calls "Gulf and Western" music, mixing influences of country and western with folk and Caribbean music. Among his most famous songs are "Margaritaville," "Come Monday,", "Fins,", "Volcano,", "A Pirate Looks at Forty,", "Cheeseburger in Paradise," "Why Don't We Get Drunk," "Changes in Latitudes, Changes in Attitudes,", "One Particular Harbor", and "It's Five O'Clock Somewhere" (a duet with Alan Jackson). Collectively, these songs are known as the "Big 10" among fans, and have been played at nearly every one of Buffett's concerts.

But Buffett is not just a musician. His two food chains, Margaritaville and Cheeseburger in Paradise, are both named after hit songs. In Miami, Dolphin Stadium was briefly renamed Land Shark Stadium (after the beer brand of the same name) under his sponsorship. His legion of devoted fans are referred to as "parrotheads".

Two of his novels, Tales from Margaritaville, and Where is Joe Merchant? topped the New York Times bestseller list. His non-fiction memoir A Pirate Looks At Fifty also occupied a top spot. He's also written another novel titled A Salty Piece Of Land, several children's books, and is stated to be working on a sequel to his previous memoir.

Buffett's not shy about his fame, either. He's made cameos in everything from Jurassic World to Repo Man to South Park. He's also lent his weight to several charities, most notably the Save the Manatee Club (which is very active in Florida). He's also raised money for hurricane relief charities.