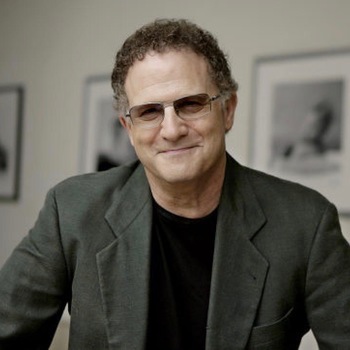 Albert Lawrence Einstein, credited professionally as Albert Brooks (born July 22, 1947 in Beverly Hills, California) is an American comedian, actor, writer and director who's been active since the late 1960s. Most people from the older generation will know him best for his appearances in Taxi Driver and Broadcast News. The new generation knows him as the voice of Marlin the clownfish in Finding Nemo and its sequel Finding Dory, and as Bernie in Drive.

He contributed several short films that ran as part of the very first episodes of Saturday Night Live in 1975-76. He's also well-known for several one-shot roles on The Simpsons, usually credited as "A. Brooks". He played Hank Scorpio in the critically-acclaimed episode "You Only Move Twice", and Big Bad Russ Cargill in The Simpsons Movie.

He's the younger brother of Bob Einstein (aka Super Dave Osborne). No relation to the legendary physicist.

His films as a writer and director include: