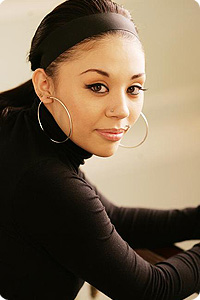 Mutya Buena (born Rosa Isabel Mutya Buena, May 21, 1985) is an English Soul/R&B recording artist who was a member of the Girl Group Sugababes from 1998 to December 21, 2005 (citing "personal reasons" for her departure, most likely to do with infighting and political strife as well as becoming a new mother). She attained four number one singles with the group with six top-ten hits and three multi-platinum albums. One of those albums, Three, contained a song Mutya dedicated to her late sister entitled "Maya".

In 2007 Buena released her only solo effort, Real Girl. Every inch a blue-eyed soul album (save for "Song4Mutya" which was a dance track produced by Groove Armada), it peaked at number ten in the UK charts and was certified Gold. However, the commercial failure of the last two singles released from the album meant that Buena was dropped from her label, Universal, in early 2008. She later released a few singles from an album with the working title Mutya Mk II but after the commercial failures of all tracks released the album was shelved. In 2010 she contributed vocals to the tribute album Sound of Camden and expressed a desire to quit music and become a child psychologist.

The same year, Buena launched a claim for ownership of the original Sugababes name with former bandmates Keisha Buchanan and Siobhán Donaghy, but ultimately only walked away with the right to use it on stationery and paper products. Because of this her reformation with the original Sugababes has lead to them using the name Mutya Keisha Siobhan instead.

In addition to her career as a musician Buena has also appeared on the Celebrity Edition of Big Brother UK.