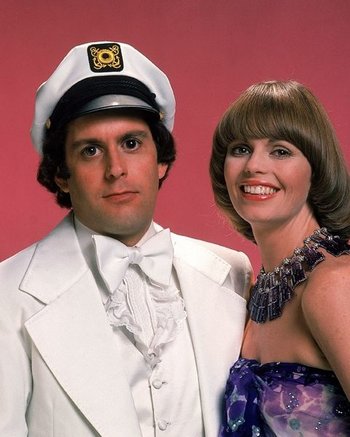 Captain & Tennille were an American musical duo whose primary success occurred in The '70s. The duo was composed of husband and wife "Captain" Daryl Dragon (born August 27, 1942 - January 2, 2019) and Cathryn Antoinette "Toni" Tennille (born May 8, 1940).

The duo's beginnings date back in 1972 when Tennille was the co-writer of a musical, and Dragon was working as a keyboardist for The Beach Boys. When Tennille's show put out a call for a replacement keyboardist, Dragon (who was between tours when he heard about the opening) met Tennille at the audition and landed the gig. Dragon would later reciprocate by recommending Tennille to the Beach Boys when the band needed an additional keyboardist, and they hired her, touring with them for a year (making her possibly the Beach Boys' one and only "Beach Girl").

Realizing their collaborative potential when the tour was over, Tennille and Dragon began performing as a duo. They scored numerous hits on the U.S. singles charts, the most enduring of which included "Love Will Keep Us Together" (which went on to win the Grammy Award for Record of the Year in 1975), "Do That to Me One More Time", and "Muskrat Love".

While their popularity waning after the 70s, they kept on recording on some capacity until Tennille announced their divorce in January 2014. Despite their divorce being somewhat contentious, they later seemed to have made up enough for Dragon to state in February 2017 that Tennille had returned to assist him with a serious health issue and to be at his side when he died of kidney failure on January 2, 2019.

Tropes associated with them include: